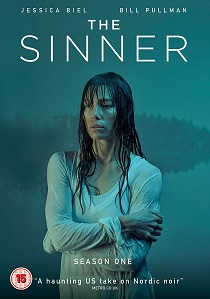 Audiences are blown away by USA's new anthology drama series, The Sinner, the #1 new cable series of 2017 and the thrilling adaptation of Petra Hammesfahr's crime novel of the same name.

The drama reverses the classic murder mystery formula when a woman's dark past leads to a brutal public murder in a small town. Building a strong fan base among viewers and critics alike, the series has been applauded for its tantalising weaving of past and present and captivating performances. Now fans everywhere can own all eight episodes of the gripping series when The Sinner: Season One arrives on DVD from Paramount Home Entertainment on 19th February 2018.

Hailed as "instantly gripping and provocative" (David Wiegand, SF Gate), The Sinner follows a young mother (Jessica Biel, Valentine's Day) who, when on a day trip with her husband (Christopher Abbott, HBO's Girls) and son, commits a startling act of violence and, to her horror, has no idea why. The event launches an inverted and utterly surprising crime thriller whose driving force is not the "who" or the "what" -- but the "why." When an investigator (Bill Pullman, Independence Day: Resurgence) finds himself obsessed with uncovering the woman's buried motive, together they travel a harrowing journey into the depths of her psyche and the violent secrets hidden in her past.